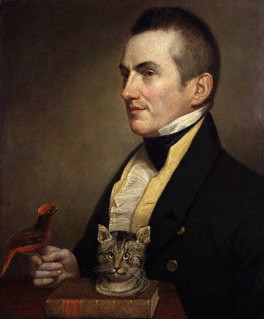 Charles Waterton 1782-1865
Charles Waterton not only undertook groundbreaking methods of taxidermy but he also used this medium for satirical methods and poking fun both at political figures of the time and also religion. So unlike Walter Potter who's work is both naive, childish and very badly executed, Waterton's work had political bite. In response to the review that we undertook on this person located within the Vcitorian page of this site, we decided that he needed a more in depth review of his life and work and as a result this page was created. Charles Waterton displayed the animals he had collected (taxidermy specimens) while travelling and these are now on display at Wakefield Museum. Here you can not only see the specimens of rare species he brought back to England, still in their original cases, but you can follow his journey through South America. These animals, though, didn't meet quite the same fate as many of the more local species he looked after in his reserve in Wakefield. The Squire was a fan of taxidermy, what the dictionary describes as 'the art of preparing, stuffing and mounting the skins of animals so as to appear lifelike'. A very different sort of nature conservation. 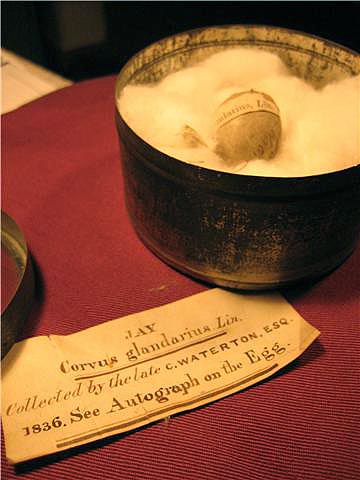 Unusual piece of history, a Jay egg collected and signed by Charles Waterton 1836. This item is not in a musuem. 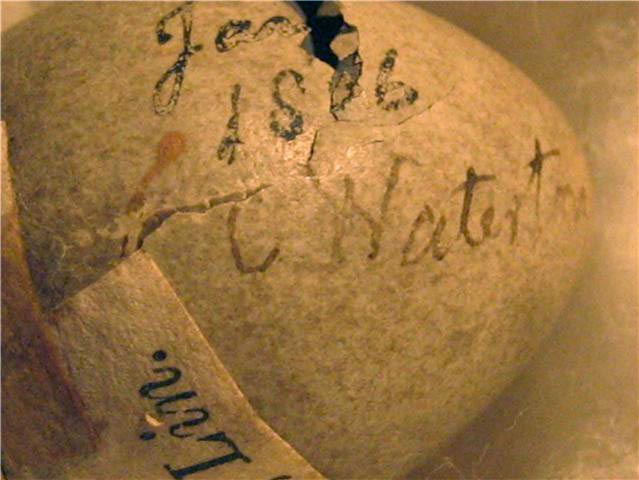 Close up of the above item 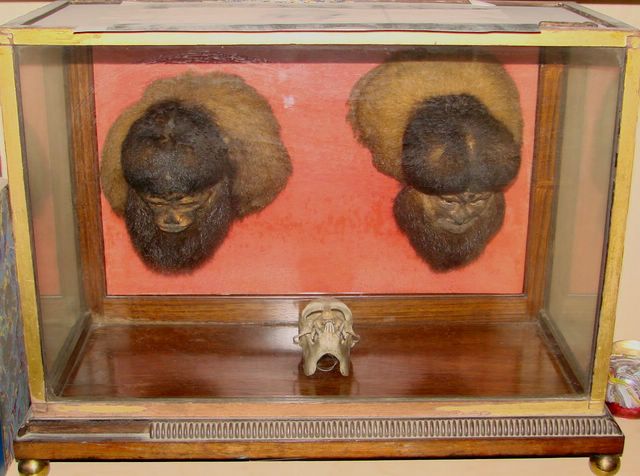 Another uality piece of taxidermy by Waterton circa 1840 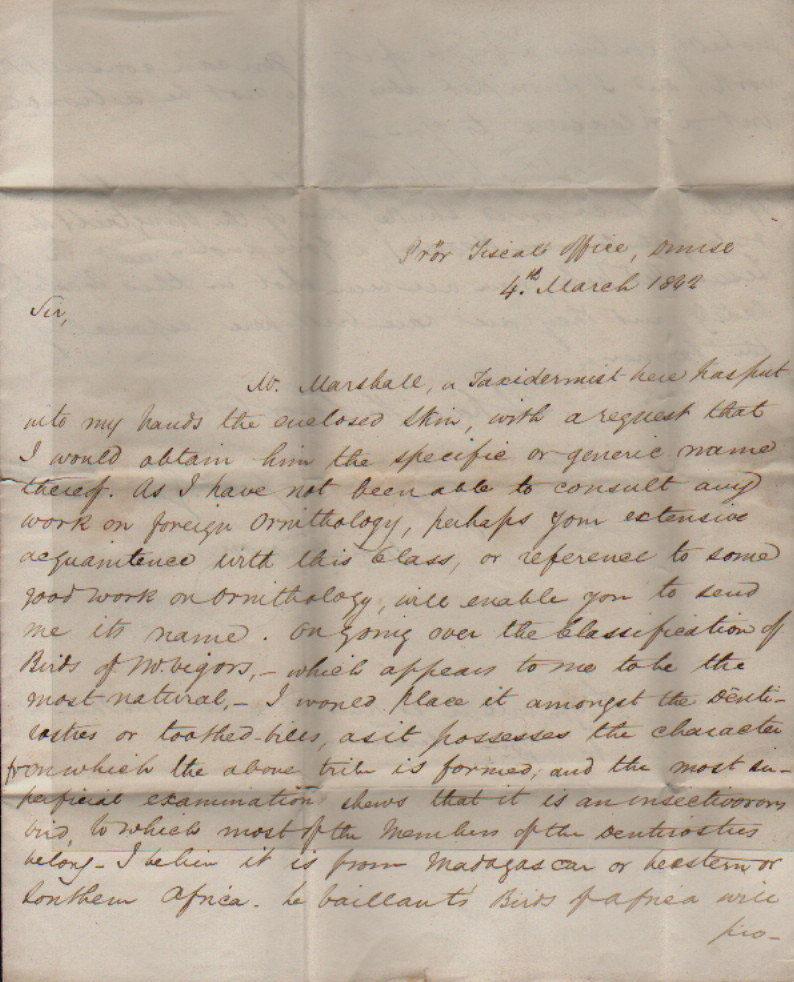 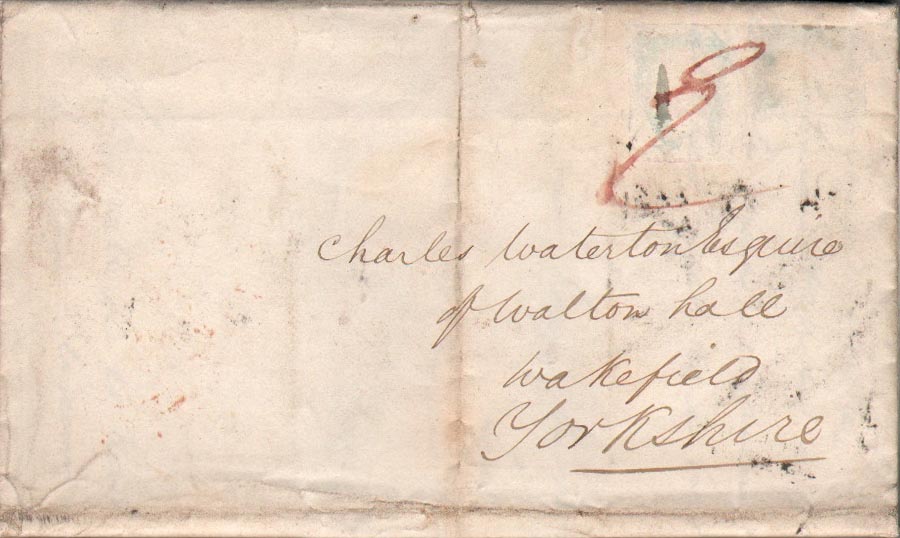 Close up of a recent letter sent to Waterton dated 1842

Close up of a recent letter sent to Waterton dated 1842 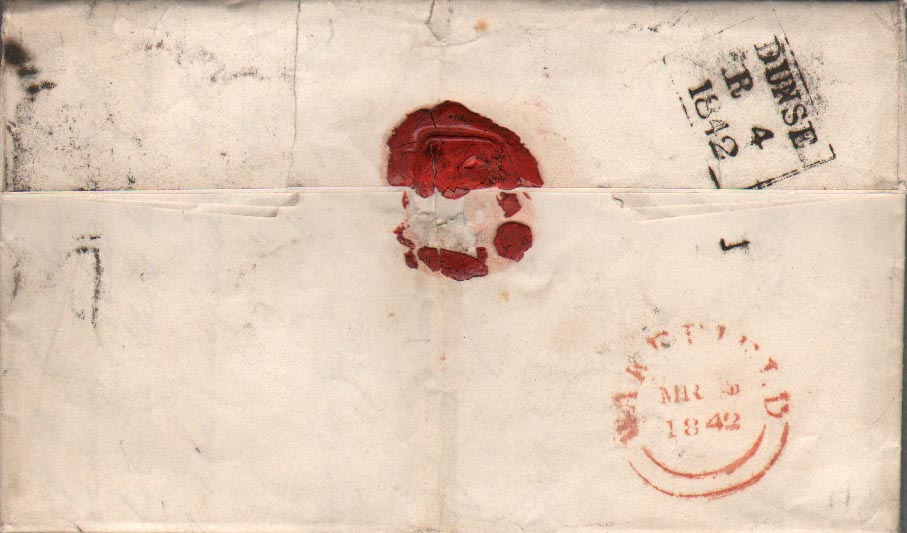 Close up of a recent letter sent to Waterton dated 1842
In fact, Waterton had developed his very own system of taxidermy, using the scary sounding mercuric chloride to stop the deterioration of the animal skins he'd collected. Having seen specimens in museums and other private collections he decide that he could do a much better job and all of his specimens are hollow. He famously told a visitor to his house: "Allow me to inform you that there are no stuffed animals in this house." His collection has survived in very good condition! 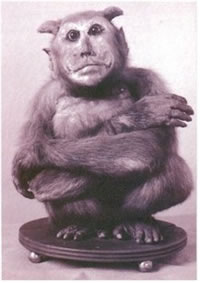 Satirical view of Martin Luther, this is Waterton having a view on religion. Waterton it appears was a devout Catholic and therefore objected to the viewsof Luther. Quite a good likeness. 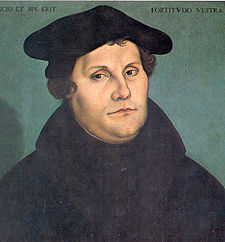 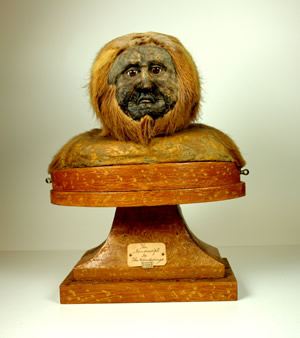 Nonedescript.
Perhaps one of the oddest things about Squire Waterton, and there were many, is that though he enjoyed closely watching animals in the wild, when it came to his stuffed animals he quite liked to combine parts of different species to create his own grotesque imaginary specimens. His 'Nondescript' is said to have been a likeness to the Treasury Secretary of the day and, being a Catholic, he created a monkey with horns and a grin which became 'Martin Luther After His Fall'. Another of his weird creations was a porcupine which is made to appear weighed down by Britain's national debt (Ł800 million at the time).

Satirical view of nation debt (Ł800 million), "John Bull" a composition of various animals, some more obvious than others.
An odd man, then, but Charles Waterton was certainly ahead of his time in setting up his wildfowl reserve - even if his egg collecting and taxidermic exploits would certainly tax the patience of any self-respecting 21st century naturalist.
Located below for those who either cannot afford to own the book or indeed are unaware of it's existence, we have decided to provide the entire transcribe on-line so that it can now be reviewed at you leisure. We hope you enjoy Waterton's own account of his travels. We have now transcribed, Ploquette and also Ogilvie for your persual also. At the end of this material there is Waterton's account of preserving birds which is a valid today as it was in 1825.


Wanderings in South America By CHARLES WATERTON dated 1825
Preface to the first edition.
I offer this book of "Wanderings" with a hesitating hand. It has little merit, and must make its way through the world as well as it can. It will receive many a jostle as it goes along, and perhaps is destined to add one more to the number of slain in the field of modern criticism. But if it fall, it may still, in death, be useful to me; for should some accidental rover take it up and, in turning over its pages, imbibe the idea of going out to explore Guiana in order to give the world an enlarged description of that noble country, I shall say, "fortem ad fortia misi," and demand the armour; that is, I shall lay claim to a certain portion of the honours he will receive, upon the plea that I was the first mover of his discoveries; for, as Ulysses sent Achilles to Troy, so I sent him to Guiana. I intended to have written much more at length; but days and months and years have passed away, and nothing has been done. Thinking it very probable that I shall never have patience enough to sit down and write a full account of all I saw and examined in those remote wilds, I give up the intention of doing so, and send forth this account of my "Wanderings" just as it was written at the time.
If critics are displeased with it in its present form, I beg to observe that it is not totally devoid of interest, and that it contains something useful. Several of the unfortunate gentlemen who went out to explore the Congo were thankful for the instructions they found in it; and Sir Joseph Banks, on sending back the journal, said in his letter: "I return your journal with abundant thanks for the very instructive lesson you have favoured us with this morning, which far excelled, in real utility, everything I have hitherto seen." And in another letter he says: "I hear with particular pleasure your intention of resuming your interesting travels, to which natural history has already been so much indebted." And again: "I am sorry you did not deposit some part of your last harvest of birds in the British Museum, that your name might become familiar to naturalists and your unrivalled skill in preserving birds be made known to the public." And again: "You certainly have talents to set forth a book which will improve and extend materially the bounds of natural science." Sir Joseph never read the third adventure. Whilst I was engaged in it, death robbed England of one of her most valuable subjects and deprived the Royal Society of its brightest ornament.