We get asked to recommend Bird Taxidermy Resources by our friends to our customers, we now include below a list of those we have had favourable feedback on this is not a complete list, if you don't find what your looking for then please feel free to contact us. If you also wish to link to us then your taxidermy information shall only be placed in the appropriate class.

.
Bass Rock is a 450 foot high crag at the mouth of the Forth of Forth, 30 miles from Edinburgh, Scotland. Bass Rock 10km off the coast is home to 70,000 gannets, and countless other seabirds, including puffins.
Adult gannets return from Morocco in North Africa to the Bass Rock Colony in late winter, and dont leave until late Autumn, not surprising when you consider that it takes 40 days for the incubated eggs to hatch, and a furthur 90 days for the young to fledge. Gannets reach maturity when they are 3 or 4 years old. They pair for life, occupying the same nest year upon year. The parents only have time to raise a single chick each summer. The eggs is a blusih green.
Both adult gannets fetch food for their chicks, taking it in turns to go on fishing trips, that can last a whole day. Disgorging a meal of regurgitated herring mackeral and sandeel on their return. Chick naked but soon covered in a fluffy down, later replaced by dark brown feathers, until reach maturity when the feathers are white. You may be lucky enough to see gannets diving torpedo like for food, folding in their wings at the last moment, diving from 10 to 300 feet.

The Bass has long shared with one or two other gannetries, notably St.Kilda and the Canadian Great Bird of Bird Rocks in the Magdalen Islands (at one time the largest of all gannetries), the distinction of being the most famous in the world. It was the first to be mentioned in literature (perhaps 6th Century) and now could well be the largest single-rock gannetry. Grassholm may be pushing a bit, but Ailsa lies well astern. In my short time the Bass population has increased from 6-8,000 apparently occupied sites (which is nearly the same thing as pairs) in 1962, to 13,500 (1977), 21,600 (1985) and 30-40,000 (1994) which is the last count. This most recent estimate (already well out of date) has the inevitably large margin of possible error.

Victorian pair of Herring Gulls with chicks. Specimens shot / obtained from Bass Rock, September 1874. This taxidermy is located at the Booth Museum, a link can be found on this page.


The lower of the two figures excluded the large number of pre-breeders, most of which should not be included in the category of 'apparently occupied sites'' though it is difficult to disentangle them. Largely due to them, the count can vary by thousands within a few days. The dramatic spread has taken breeding birds from the top of the northwest cliffs to the very summit of the Rock. Spreading from the east side they have blanketed the ground and would long ago have covered the concrete path and continued upwards to meet their fellows from the northwest but for the human traffic. Gannets are also proceeding apace down the crags towards the chapel to join up with the group directly behind the lighthouse. This latter numbered 10 pairs in 1961 and is now well over 1,000 strong and beseiging the entrance to the chapel. They confront the visitor a mere foot from the edge of the path. 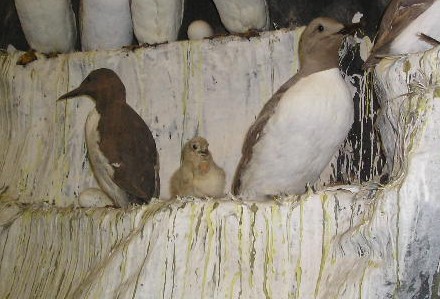 Victorian Guillimots nest, chick and eggs. Specimens shot / obtained from Bass Rock, June 1867. This taxidermy is located at the Booth Museum, a link can be found on this page


The east flats above the lighthouse, had not a single gannet in the early 60s and are now blanketed. Most of the gulley headland, not long ago covered by turf and the Dalrymples' favourite picnic spot, has now been taken over, though many of them are still pre-breeders. Even the low rocks by the inner landing, for long the preserve of guillemots and shags, is rapidly being colonised. The south slope below the battlements is still free but old records say it once held over 300 pairs and no doubt it will do so again. From North Berwick and Tantallon, the Rock appears to be well nigh covered, apart from a wide and variable strip roughly bordering the path. Most of the gannets between the top of the path and the summit cairn are not yet breeding. Many are 2 or 3 years old which come and go. Others are pre-breeders establishing a definitive site in the season before breeding for the first time. 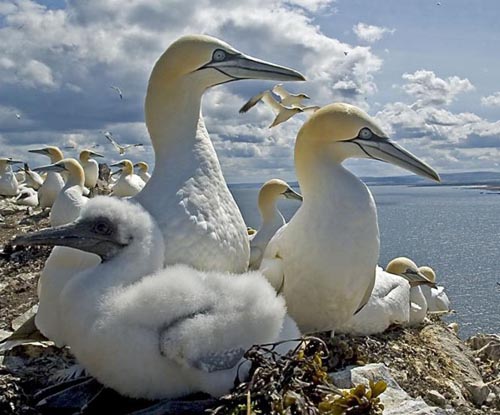 Wonderful view of Gannet colony at Bass Rock. These are birds that are not stuffed.

The image below is a Taxidermist's interpretation of Bass Rock in 1874
. 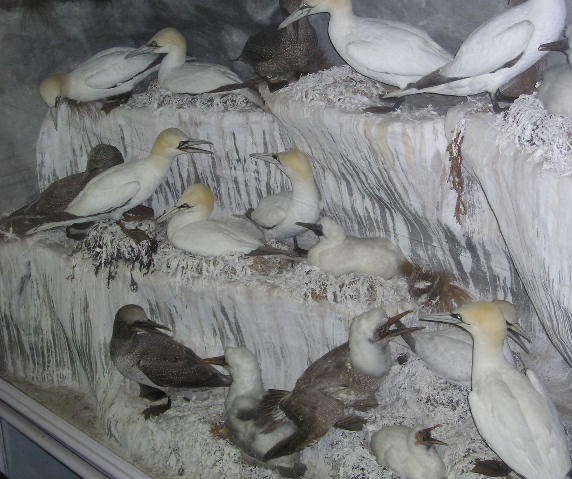 North Atlantic Gannets at the nest in a colony. Specimens shot / obtained from Bass Rock, September 1874. Birds were taken from this colony for commercial purposes. They were plucked and sent to Market in Birmingham and Manchester and sold for eating for eight pence and ten pence each. The feathers were then used in bedding, once the smell of guano was removed from the feathers. 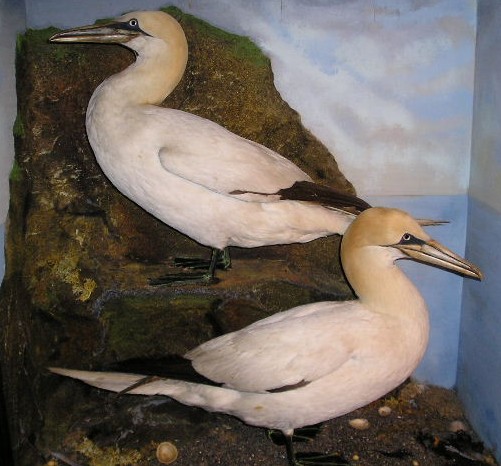 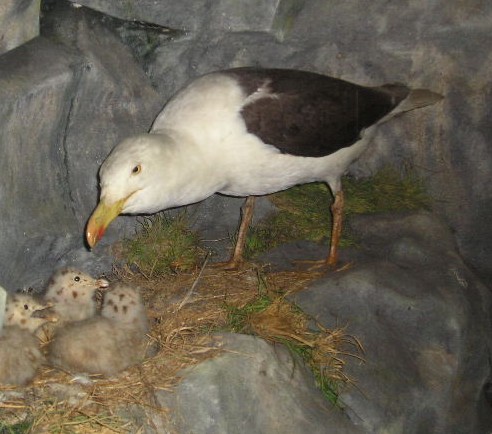 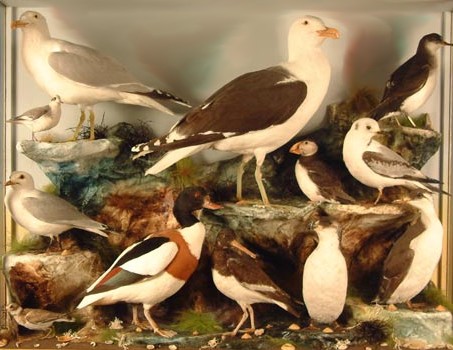 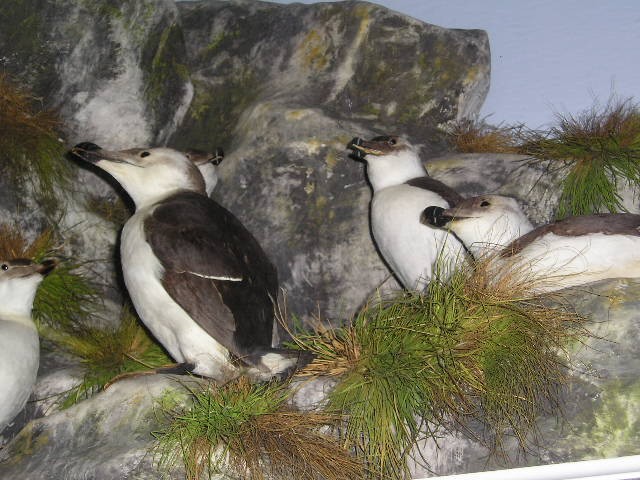 Victorian Razorbills in Summer plumage. Specimens shot / obtained from Bass Rock, September 1874.This taxidermy is located at the Booth Museum, a link can be found on this page 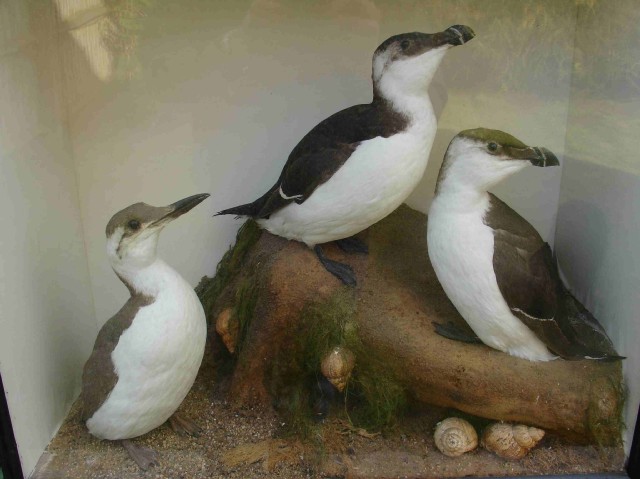 VIctorian Sea birds in a Winter scene. These birds would have also inhabited Bass Rock 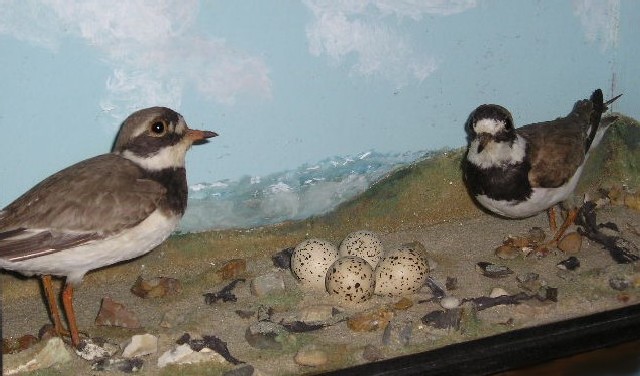 Victorian Ringed Plovers. The eggs are original and in keeping with the attitude of the time. Taxidermists would go out and shoot both adult birds, take either eggs or chicks and create this type of case. The case must therefore be viewed in it's historical context.