Whilst we already have an extensive page of images and research dedicated to the life and work of William Farren, this bird, we feel is perhaps important enough to have a page dedicated to itself. Please review and decide accordingly.

Here is another potential "first" for those who appreciate data and historical importance of taxidermy. This could be a female Pied Wheatear (Oenanthe pleschanka) by Farren of Cambridge. The British Trust for Ornithology first record this bird as a rare visitor to the British Isles in 1909. First Record: Isle of May, 1909. Therefore this case has some brtish historical importance as this bird was shot in 1905 4 years before the BTO even knew it came to Britain. This is therefore potentially a special bird indeed and yes you have guessed it not for sale. So not only we are the largest resource on the internet but we maybe discovering birds that are recorded even before the official dates. Quiet something really.

For those of you interested in historcial taxidermy data. Pied Wheatear, shot at Illington by John Miles dated .....7th 1905. Farren's lable states that it was preserved 31/1/1906. Illington is near Thetford in Norfolk. For those whole collect British listed birds of the victorian era this is (if confirmed as being a Pied Wheatear) perhaps as rare as they get, especially that it was preserved before even being recognised as being on the "British list". Not for sale by the way, but just another example of the resource this site has at its disposal. Of the only 46 sightings of this bird, the last one was Shetland 2004. Not been recorded since then by the BTO. The British Birds Rarities Committee only have this bird "on record" in 1954, steadily increasing in sightings since then.

1865-1952
William Farren born in 1865, the famous Cambridge naturalist and furrier, whose father, William Farren, junior, of King's Old Gatehouse and afterwards of 10, Rose Crescent, was an original member of the Cambrdige Natural History Society, becoming its secretary; and in 1907. He was perhaps the best provincial taxidermist in this region and a keen amature ornithologist. Our research shows that Farren was well known in ornithological circles and was member of the National trust and other local conservation groups. It is likely that he would have known of ET Booth who studied at Cambridge and shot specimens from the fenlands of Cambridgeshire and East Anglia. Farren, a gifted taxidermist of both birds and mammals and also an author of books, the subject being principly birds, also trained other taxidermists. His links with both the university both directly and indirectly with his family mean that his access to a vast knowledge base is well known. For this reason we areassured due to the provenance of the taxidermist that the identification of the bird would have been accurate but what surprises us is that this bird, being so rare was not brought to the attention (See Bristowe for an extream example of "first's" claims) of the organisations that records such data. As secretary Cambrdige Natural History Society, he would no doubt shared this information and may have presented this example at a meeting for both confirmation of the species and also its status as a first in the UK. 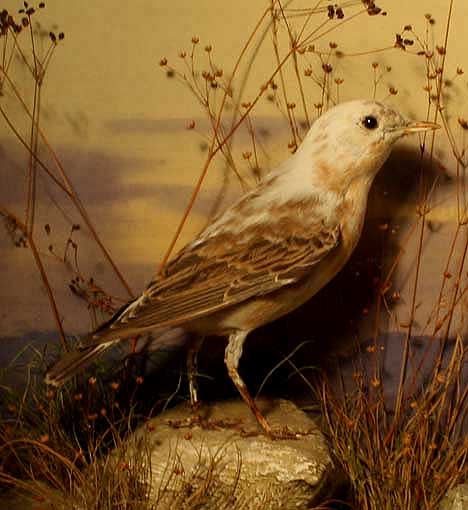 Pied Wheatear by William Farren
Afterall the BTO state that there have only been 46 confirmed sightings of this bird since their records began and whislt common in central asia / China it was certainly far from home when it met its untimely end in Illington in 1905. Given Illington is perhaps closer to Norwich and therefore TE Gunn it is strange that this bird was not delivered there as Gunn was by far the larger practice at the time. Perhaps William Farren was present on the day and therefore they were collecting specimens together. Speculation I grant you but without provable facts pertaining to this specimen it is curious as to why Farren was tasked with preserving it. It is strange however that if the correct identification of the bird being a Pied Wheatear then why wasn't the organisations consulted to register this bird as being on the British list?. It will beinteresting to see if the BTO produce any other date but we suspect that they may have strict criteria (e.g., two credible, experienced observers) for accepting a siting, which this case will not meet. The person who shot the bird is not know to us and our research drew a blank. The case in question was acquire at a Sotherbys in Billingshurst in Sept1999. A Rowe immature Green Woodpecker, and Cooper Dabchick were also acquired at the same time for a paultry amount in comparison these days. William Farren died in 1952, leaving behind some lovely cases to admire and clearly a mystery which we are endeavouring to research to determine the validity of this case. It might even cause the BTO to re-write their records specific to this genus.

Given that Farren amongst others (FC Jourdain by example) contributed to Kirkman's "Book of British Birds", which included nest and eggs and that the date of publication was 1911-1913, then Farren would have had eminent people to call upon for the correct identifcation of birds. The bird in question was preserved on 31st January 1906 and was labelled "Pied Wheatear" at the time of preservation. Perhaps he would have discussed this find with others who assisted with the book, given that it preceeds the first recorded sighting in 1909. We have supplied the BTO and the BBR with detailed images of this bird and the rationale behind why we belive this bird to have been correctly identified at the time of acquisition. There is no reason to doubt the "shooter" and or location for that matter. The BTO beleive that this may indeed be an autumn migrant as the date of preservation fits with this assumption. More credibility is also given to this case because of Farren's ornithological pedigree and his links with Kirkman, Jourdain and Wicken Fen (one of the oldest nature reserves in the UK). Had he been butcher and or farm labourer, as Thetford of the time would have been exclusively agricultural, then questions may be raised as to his ability to identify birds credibly. We are of course awaiting their opinion and if correct the records shall be amended to this bird being the first of its kind to be officially recorded some 105 years after its death. It is interesting that normally identification is perhaps a fleeting glimpse and a hasty decision. This is a cased bird and if authenticated shall have british historical ornithological significance as well as british historical taxidermy significance. A rare bird and perhaps the first recording witin the british list.It is a long shot as the bird has suffered from fading (105 years tends to do that to things)and could be a Northern Wheatear in part abberation. There is a comic irony to all this as the initial motivation at the time of purchase was to "simply hook it out of the case" and replace it with say a Robin or Redstart. Now not wishing to criminalise those who undertake this ghastly trade, but who would do such a thing as this?. 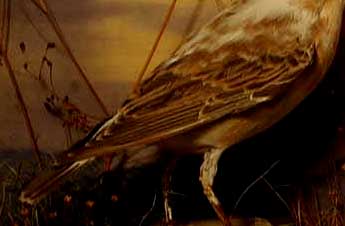 Pied Wheatear by William Farren. The answer appears to lie within this section of the bird solely and it is this area where detailed images have been taken for review by BTO and BBR. Whatever the outcome the bird is not for sale.

Robert Farren, William's father was Born in Willow Walk, Newmarket Road in 1832 he worked as a heraldic artist & in the Geological Museum mounting specimen and labelling cases. He published books of engravings of the area including ‘The Granta and the Cam’ (1880) & ‘Cambridge and neighbourhood’ (1881). In 1885 he moved to Scarborough but came back after eight years, dying in 1912.