Towards the end of the Victorian era in Britain, several waterfowl birds were seriously threatened with extinction due to the demands of fashion. For example, the skin and soft underpelt and head frills of the great crested grebe's feathers were particularly in demand by the millinery trade to decorate ladies' fancy hats and ruffs. The only way to obtain such feathers was by killing the birds. In one year, according to the official trade figures of auctions at the London Commercial Sales Rooms, some 1,608 packages of heron plume came under the hammer. 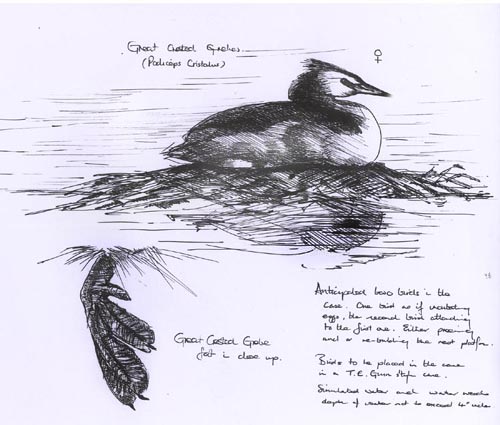 Pictoral view of a pending mordern case of Great Crested Grebes. Another collaborative effort, with a nest scene. Unclear as to whether we should incorporate eggs into this scene currently. One bird will be swimming and the other on the nest raft. Most grebes were unfortunately mounted like Penguins, which frankly is a waste of such a fabulous bird. 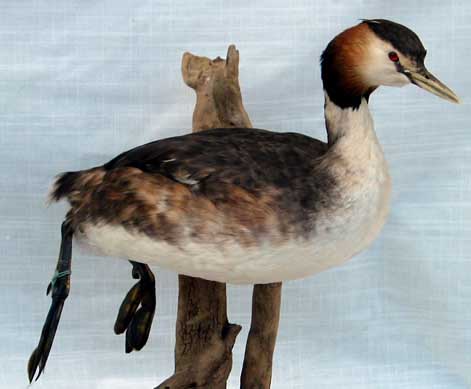 Great Crested Grebe by Mike Gadd.
This was the skin and soft under-pelt of a great crested grebe's breast feathers, that were used as a fur substitute in ladies' fashions. Once this caught on, the superb head frill feathers of the adult grebes' breeding plumage became highly fashionable in the millinery trade. These feathers could only be taken by killing the birds. As a result, numbers of grebes fell rapidly. The fashion for decorating fancy hats with wild-caught feathers was waning before legislation could be put in place to prevent their use, but the Society had its influence even then.By 1860, the great crested grebe was nearly extinct in Britain and Ireland. From the protests of this trade the R.S.P.B. was formed. 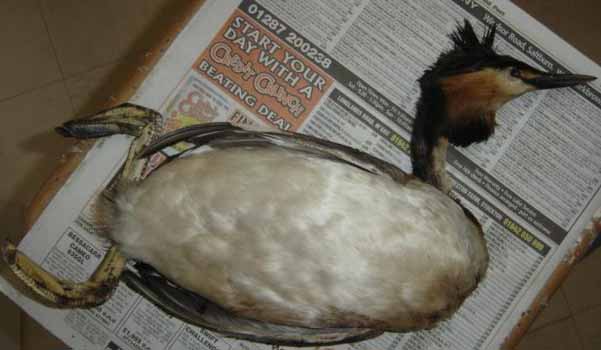 Great Crested Grebe in summer plumage, awaiting skining.
Such was the demand for feather in Victorian times, that pressure was placed upon both domestic birds (Herons, Egrets, Great Crested Grebes) as well as those from the colonies. By example when the then Duke of York was resented with a feather for his hat, trade in Huia feathers increased to such an extent that the bird was declared extinct by 1907.Only taxidermy specimens of this once prized species remain. Commonly utilised British birds for the feather trade included Gull, Herons, Terns, Jays, Pheasants, finches and Grebes. It is also worth noting that The Great Auk’s demise was in part principally due to the over exploitation of the bird for its feathers following the decline of the North Atlantic Eider duck decades before that. The Gannet was also exploited in the UK very much for the same reason as Eider ducks and their demise was also duly recorded by Thomas Booth during his collecting of specimens in the late 1800’s. 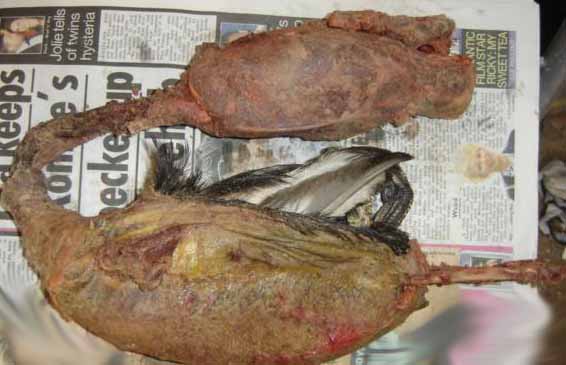 Great Crested Grebe awaiting fleshing.
During two walks along the streets of Manhattan in 1886, the American Museum of Natural History's ornithologist, Frank Chapman, spotted 40 native species of birds including sparrows, warblers, and woodpeckers. But the birds were not flitting through the trees -- they had been killed, and for the most part, plucked, disassembled, or stuffed, and painstakingly positioned on three-quarters of the 700 women's hats Chapman saw. The North American feather trade was in its heyday.

Great Crested Grebe awaiting fleshing. This bird has been skinned with a back incision.
Throughout the preceding 30 years, general economic prosperity of a growing middle class had provided opportunities to purchase nonessentials. Emulating the fashionable elite, men selected fedoras with feather trim and women adorned their hair, hats, and dresses with "aigrettes" (sprays) of breeding plumage taken from a variety of birds. Accordingly, women's hats became larger, hat ornamentation (reminiscent of that found on dress military headgear) became more lavish, and the feather trade expanded its enterprise to include marketing the remains of some 64 species from 15 genera of native birds. 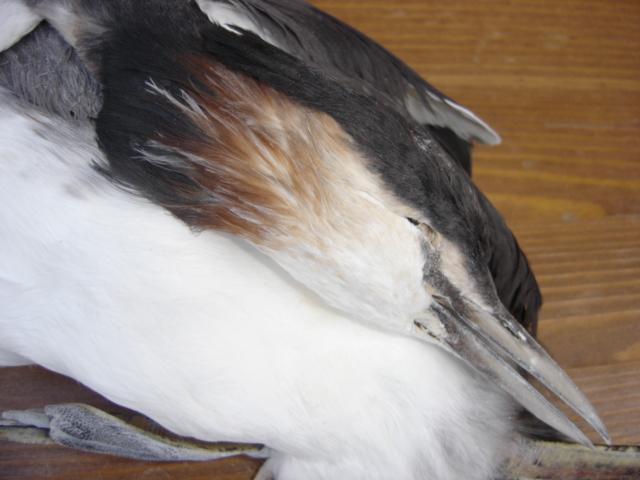 Great Crested Grebe head in close up.
Herons were favoured. The Great Egret and especially the more plentiful, more widely distributed, more approachable, and more delicately plumed Snowy Egret, suffered great losses. These birds had evolved extravagant breeding plumage as sexual advertisements to attract their mates. The feathers, apparently, had such a similar effect on 19th-century men that sources of supply began to disappear. So extensive was the decoupling of egrets and their skins that egrets were adopted as the symbol of the bird preservation movement. Writers such as Herbert job began to focus their protests on the robbing of heron rookeries: Here are some official figures of the trade from one source alone, of auctions at the London Commercial Sales Rooms during 1902. There were sold 1,608 packages of... herons' plumes. A package is said to average in weight 30 ounces. This makes a total of 48,240 ounces. As it requires about four birds to make an ounce of plumes, these sales meant 192,960 herons killed at their nests, and from two to three times that number of young or eggs destroyed. Is it, then, any wonder that these species are on the verge of extinction? 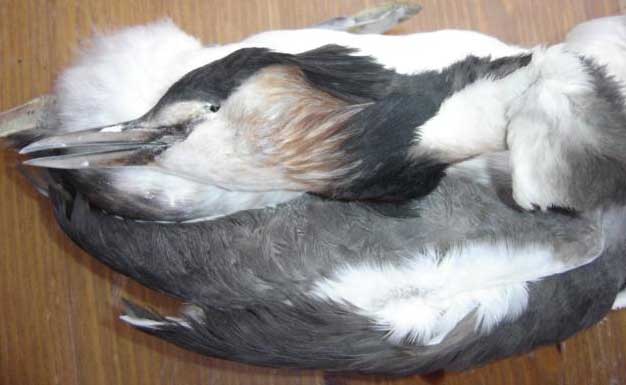 Great Crested Grebe head in close up.
There was no question that plume trading had become a very lucrative business. "In 1903," job continued, "the price for plumes offered to hunters was $32 per ounce, which makes the plumes worth about twice their weight in gold." (Later they were to bring $80!) It should not be surprising that the millinery trade, an industry employing 83,000 people (1 of every 1,000 Americans) in 1900, stood fast against claims of cruelty and exploitation and offered the public false assurances. It was carefully explained, for instance, that the bulk of feather collection was limited to shed plumes -- those found scattered on the ground within rookeries. In truth, those "dead plumes" brought only one-fifth the price of the live, unblemished, little-worn ones. To counteract the charges of cruelty, claims were circulated that most feather trim was either artificial or produced on foreign farms that exported moulted feathers. The demand for egret feathers, nonetheless, began to slip.
No sooner was the public weaned off egrets than it fixed its attention on seabirds of the Atlantic coast. And harvesting did not stop there. Hunting of West Coast terns, grebes, White Pelicans, and albatrosses for ornamental feathers also expanded. By the turn of the century many millions of birds were being killed by plume hunters each year. Preservationists struggled to enact laws to prevent the killing, possession, sale, and importation of plume birds and ornamental feathers. They disseminated their information through numerous periodicals (including Bird Lore and Audubon Magazine), many books, and the campaigns of the American Ornithologists' Union (founded in 1883), the Audubon Society, and other conservation organizations. The Audubon Society offered public lectures on such topics as "Woman as a bird enemy" and erected Audubon-approved millinery displays. It also selected regulatory committees to audit the millinery sold in key areas. These actions helped more women to recognize their role in the issue and more men in the millinery trade (whose livelihoods had come from encouraging those women into that role) to change their orientation as interest in feathered fashions subsided.
In 1889, two small concerned groups decided that if they got together something could be done. One was Mrs Emily Williamson's Plumage League in Didsbury, Manchester, which met at the local Fletcher Moss Botanical Gardens to campaign against the craze for egret feathers from Florida. The other was the Fur and Feathers League run by Mrs Phillips in Croydon, near London, which campaigned against the killing of grebes.
It was decided to complete this case in the same style as cases that can be found both in the Booth museum in Brighton and also the cases that were regularly produced by TE Gunn of Norwich. The decision not to follow the style of placing the birds on their legs and position them upright was taken as normally these birds do not exhibit this behavoir and if they do it is both ungainly and infrequent. Grebes as best and most often observed on the water. In fact the evoilution of this species, has meant that the leg placement is situated far back on the body of the bird making movement across land cumbersome and almost impossible. Given that egg collecting is now illeagal and chicks are almost impossible to come by, it was decided to just create the nest without either the eggs and or chicks. To create the eggs visible would mean lifting the bird up which again would make the bird on the nest look abnormal. Historically TE Gunn used coloured glass to create the water effect, but now perspex can be used to sit one of the grebe's into the water, surrounded by weeds and the other bird on the nest. The perspex allows the placement of the bird into the water at the correct level and also allows the use and view of the feet, beneath the water line.

The Lacey Act was passed in 1900 and represented the first national conservation law. The Lacey Act prohibited interstate transport of wildlife killed in violation of a state law, and also allowed individual states to prohibit import of wildlife or their products even if killed lawfully. For example, egret plumes taken in a state where the bird was protected could not be shipped to other states; in addition, a state could outlaw entry of the plumes even if collection was legal in the exporting state. In 1908 the scope of the Lacey Act was expanded to include wildlife imported from abroad. The Lacey Act contributed to the elimination of the meat markets where the last Labrador ducks were sold, and of the plume trade that nearly led to extinction for the snowy and common egrets as well as other water birds 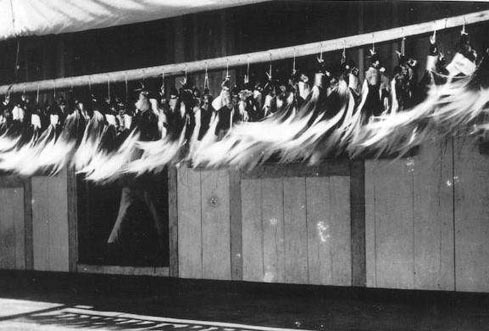 Birds of paradise, killed solely for the plume trade and taxidermy.
Europeans first became aware of birds of paradise in the sixteenth century, after merchants returned from Indonesia with prepared specimens known as 'trade skins'. These skins were made to display the birds' fabulous plumes, and had the feet and wings cut off. As a result some Europeans thought that the birds did not have feet and spent their lives floating through the air, drinking dew and never touching the earth until their death. It was because of this that they were called birds of paradise. One species was even named Paradisea apoda, meaning 'the footless bird of paradise'.
The extraordinary beauty of these birds combined with the mysteries of their lifestyle meant that they were sought after by collectors, who often obtained them through the plume trade. The great collector Sir Hans Sloane (1660-1753) had a number of specimens in his own collection. Although some complete skins, including the feet and wings, had come to Europe from the early 1600s, scholars found it difficult to interpret the function of the males' courtship plumes and the nature of the birds' displays from only a few specimens.


Taxidermy4Cash does not undertake taxidermy, rather we are collectors of other people’s work, both current and historical we also offer web hosting, a search engine submission service and increasingly one of the larger article resource banks on the net. So if your keen to learn about Taxidermy etc, then you know where to look. We are always interested to here about new resource, if you feel a resource should be listed here then please contact us.