We get asked to recommend Taxidermy Resources and Taxidermy information to our friends.This page offers a glimpse of the future. Whilst the Victorians Taxidermist killed birds and mammals directly for the production of dioramas as was then the fashion, we have either intentionally or by neglect caused massive disrutpion in the Earth's fragile ecosystem in the last 100 years. An interesting fact is that 82 million barrels of oil are consumed daily. This oil is finite, with no practical alternative in the pipeline. We are a Hydrocarbon based economy whether we like it or not. We are all in for significant change in the future. In ecological / geological terms, that changes is merely seconds away. For example, the grains of sand on a beach may exist in a phenomenal quantity, but if just an eggcup of sand is removed from the beach every day, in geological time the beach will disappear in an instant. Such is the power of time Lets hope we are prepared. Lets hope our children are prepared. 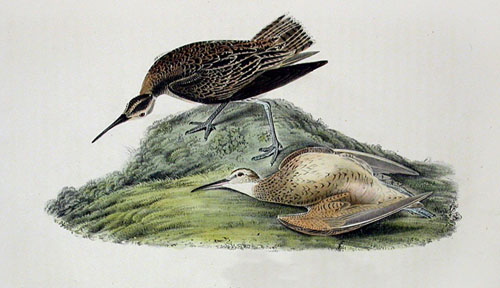 Eskimo Curlew by John Audubon
At one time, the Eskimo Curlew may have been one of the most numerous shorebirds in North America with a population in the millions. As many as 2 million birds per year were killed near the end of the 19th century. The last confirmed sightings were in 1962 on Galveston Island, Texas (photographed) and on Barbados in 1963 (specimen).
In the fall, large numbers of Eskimo Curlews would historically gather along a 160 km stretch of the Labrador coast with plentiful crowberry shrubs (known in Labrador as curlew berry). In impressive displays of gluttony, early reports describe curlews with feathers stained purple from the juice of these berries. Eskimo Curlews would also forage for snails and mollusks and other invertebrates along the coastline. This intensive feeding helped these birds build up the fat stores necessary to make their arduous non-stop journey to South America. 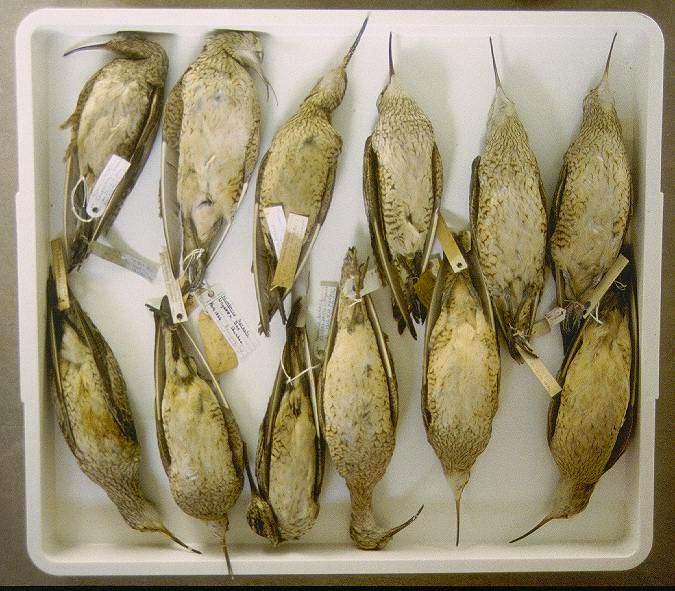 Eskimo Curlew mounted beneath a dome. 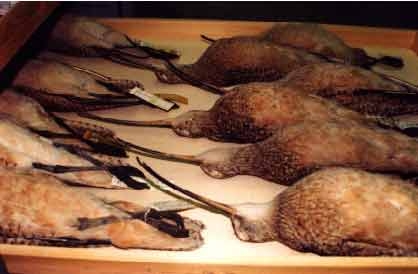 Eskimo Curlew cabinet skins, which is a waste. 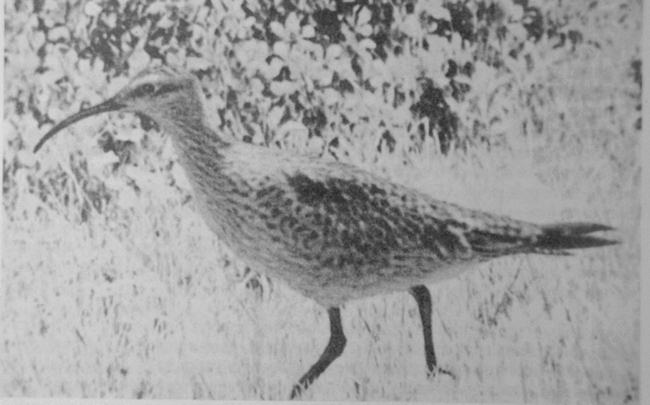 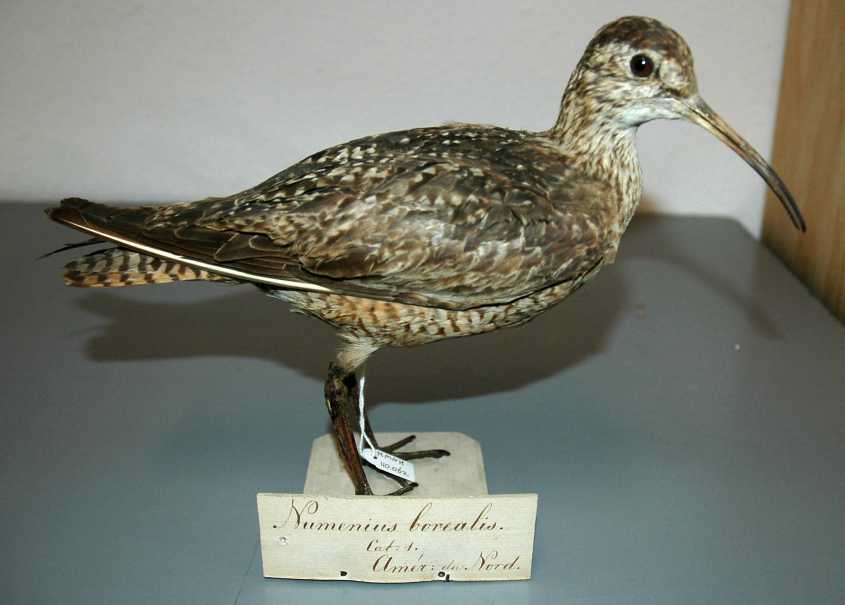 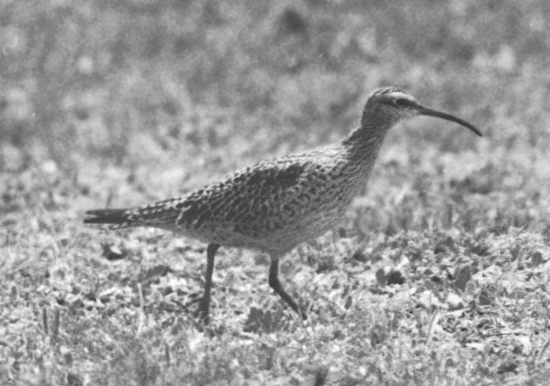 Eskimo Curlew mounted by George Bristowe of St Leonards on Sea. This is a significant piece of british historical taxidermy as Mr Bristowe's methods of procurement of such specimens were questioned. Please refer to the page dedicated to Bristowe for further elaboration
Once abundant, the Eskimo Curlew has not been reliably sighted in 30 - 40 years. Occasional reports of this species leave open the possibility that a very small population may still exist in the wild, but most authorities consider this species extinct. Like the Passenger Pigeon, market hunting of this species led to dramatic declines in the last few decades of the 1800's. Whereas flocks of thousands of Eskimo Curlews were not uncommon in the mid-1800's, by 1900 observations of small groups anywhere in the Americas was considered a rare event. Although hunting was one reason for their decline, it seems the combined impacts of other concurrent factors prevented a recovery for this species.
In the mid-1800's, huge flocks of Eskimo Curlew migrated north from South America to their nesting grounds in the Alaskan and Canadian Arctic. Historic reports tell of the skies being full of Eskimo Curlews as they migrated through the prairie states and provinces. One historic report describes a single flock feeding in Nebraska that was said to have covered 40 to 50 acres of ground. During migration, they fed on grasshoppers and other insects on the grasslands of the central United States. 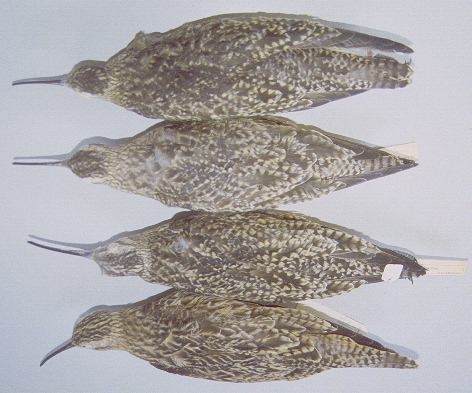 Eskimo Curlew
Between 1870 and 1890, unrestricted hunting rapidly reduced populations of Eskimo Curlew. Considered very good to eat, the birds were killed by thousands of market hunters, just as the Passenger Pigeon had been years earlier. The curlew's lack of fear and habit of traveling in large flocks made it an easy target. 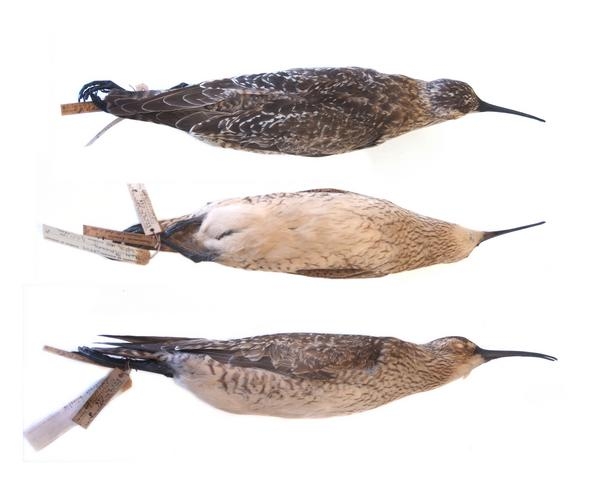 Large scale hunting in the 1870's, 80's and 90's was a primary cause of the decline of this species. However, other concurrent events may have hampered the recovery of this species once the market gunning declined. The suppression of fires, near extirpation of bison, and other alteration of the prairie grassland ecosystems by waves of human settlers in the late 1800's reduced foraging habitat for spring migrants. Conversion of grasslands to agricultural lands may have also contributed to the decline of grasshoppers (notably the Rocky Mountain Locust), a primary food source for the curlew.
If a population of Eskimo Curlews still exists, it is bound to be very small (most estimates are all under 100 individuals), and highly susceptible to a single catastrophic event. Continued habitat alteration in areas once used as migratory stopovers and mining and petroleum extraction prospects in arctic breeding grounds would also be a threat to remaining individuals. There was an unconfirmed report of 23 birds in Texas in 1981, and more recent additional unconfirmed reports from Texas, Canada (1987), and Argentina (1990). The Eskimo curlew was thought to be totally gone by 1940 but a few periodic sightings since then have kept them from being declared extinct. With a population less than 100 the species does not have sufficient genetic material to sustain itself. So if not extinct it might as well be.