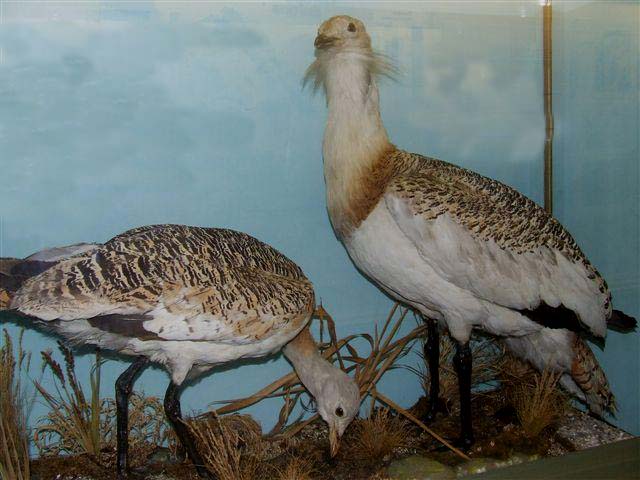 Great Bustards. This pair have been attributed to Murray, but look more like the work of Rowland Ward. Virtually every museum collection we have encountered has a display of Bustards which suggests they were more common than once thought. A recent re-introduction to Salisbury Plains may see this species thrive again.
The Great Bustard, (Otis tarda), is in the bustard family, the only member of the genus Otis. It breeds in southern and central Europe, where it is the largest species of bird, and across temperate Asia. European populations are mainly resident, but Asian birds move further south in winter. Sizeable populations exist in Hungary, Portugal, Slovakia, Russia and Spain, but the species is declining due to habitat loss throughout its range. 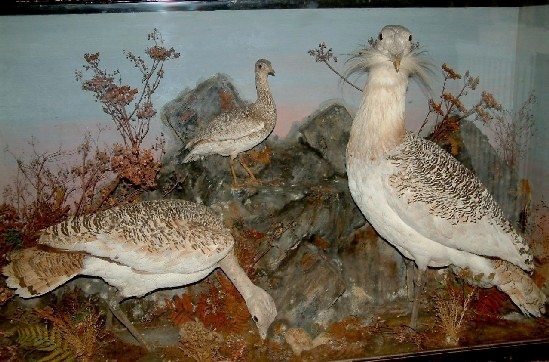 Great Bustards by unknown Victorian taxidermist. Originally part of the Captain Oates Collection. The case both has historical significance due to his part in the ill fated Antarctic Expedition and also these birds became extinct in the UK in the mid 1800's and are now part of a re-introduction program. It is pleasing to see that this case shall remain in the UK.
The male of this huge bird is possibly the heaviest living flying animal, alongside the similarly sized Kori Bustard. An adult male typically is 90–110 cm (3.0–3.6 ft) long with a 2.1–2.5 m (6.9–8.2 ft) wingspan and usually weighs from 10 to 16 kg (22 to 35 lb).[1] The heaviest known bird was about 21 kg (46 lb), although larger specimens have been reported but not verified. An adult male is brown above and white below, with a long grey neck and head. The breast and lower neck sides are chestnut. In the breeding season, the male has long white neck bristles. In flight, the long wings show large areas of white. 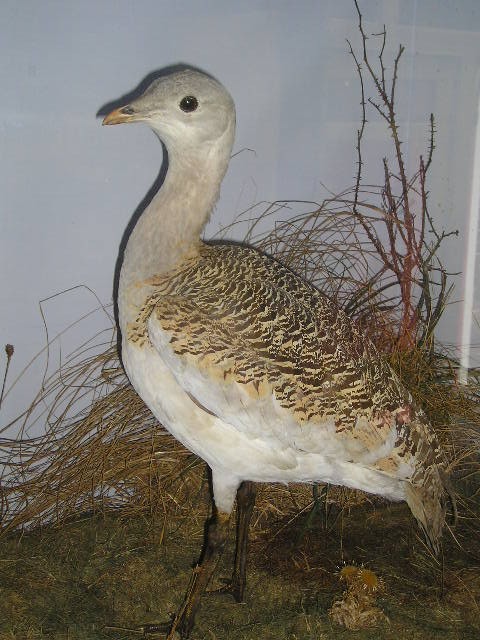 Victorian Great Bustard, obtained from the South Downs. This specimen was obtained by ET Booth and is now housed in The Booth Museum, Brighton.

The female is 30% smaller (typically 80 cm in length and 1.8 m across the wings) and one-third the weight of the male, averaging 3.5–5 kg (7.7–11 lb).[1] Perhaps because of this, there is a slewed sex ratio of about 1.5:1 female to male. The breast and neck of the female are buff. Both sexes are usually silent. Immature birds resemble the female. Before mating, the males moult into their breeding plumage around January. Like other bustards, the male Great Bustard has a flamboyant display showing much white, mainly from the undertail, and withdrawing the head. The Great Bustard breeds in March, and a single male may mate with up to 5 females. All breeding Great Bustards also moult again from June to September. 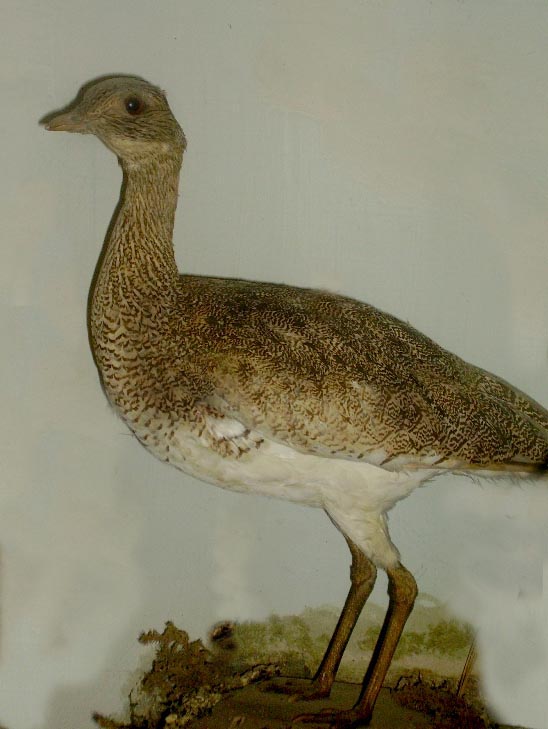 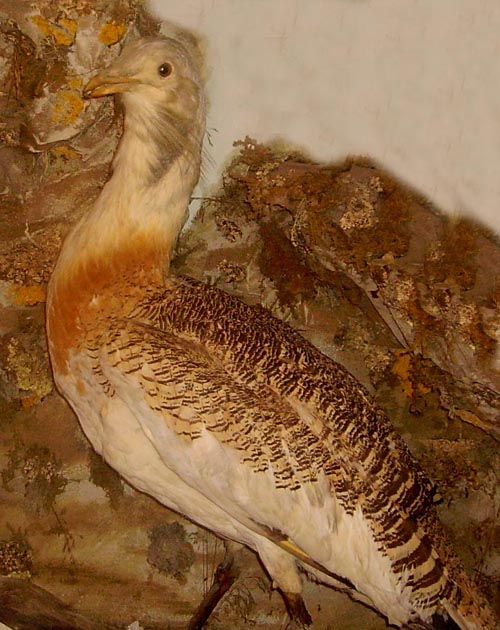 European Great Bustard.
Populations vary from region to region with 1,400 Great Bustard individuals residing in Portugal, another large population of around 6,000-7,000 birds resident near Saratov in Russia and 23,000 individuals in Spain. Sizeable populations still exist in Hungary, where the Eastern European steppe zone ends, near Dévaványa town and also in the Hortobágy, Nagykunság and Nagy-Sárrét regions. There were 1,350 birds in February 2006, down from a population of 10,000-12,000 before the Second World War. The Hungarian authorities are seeking to preserve the long-term future of the population by active protection measures: the area affected by the special ecological treatment had grown to 15 square kilometres by the summer of 2006.
The Great Bustard was formerly found in the south of the British Isles (a bustard forms part of the design of the Wiltshire Coat of Arms) but was hunted out of existence by the 1840s. In 2004 a reintroduction to Salisbury Plain in Wiltshire using eggs taken from Saratov in Russia was undertaken by The Great Bustard Group, a U.K. Registered Charity that aims to establish a self-sustaining population of Great Bustards in the UK. This reintroduction project continues to see successful hatchings.

Gilbert White, the natural historian of Selborne, Hampshire, who wrote “The Natural History of Selbourne”, was often seen passing through Findon on his bouncy carriage journeys on the way to Ringmer to visit his Aunt whose enchanting name was Rebecca Snooke. It is guessed that he stopped off at the Gun Inn for a break in his journey. What was Findon like at this time? It was quite an obscure rural community. For instance, the town of Worthing just to the south of Findon was described as inhabited only by unlettered fishermen and equally rude cultivators of the soil.
He wrote in the early 1770s a tantalising sentence recording his visit to Findon Some bustards are bred in the parish of Findon. So I can only guess that some bustard farming was undertaken in Findon at this era. Unfortunately, he added no further information. If only he had paused to give us a one-liner explanation. Where were they seen? Were they an every day sight? If only he had written whereabouts in Findon they were bred and by whom, it would have given us a glimpse of Findon of the past. The breeding must have been conducted on quite a large scale, perhaps on one of the larger estates, for him to bother to mention it in his writings. We do not even know if Gilbert White ever clapped eyes on the wary birds himself. We have to be satisfied with the knowledge that “bustards are bred in the Parish of Findon”, which in those days must have been an ideal spot for them. 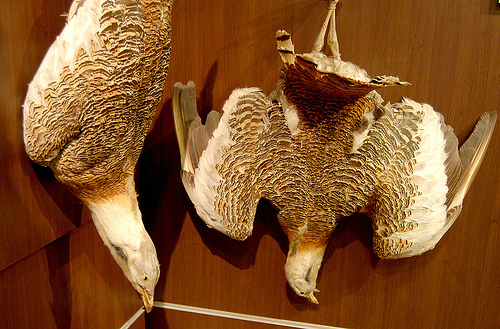 Victorian Great Bustards mounted as dead game.
The final attempt to breed bustards in Britain was in Suffolk in 1832. Since then their presence has been limited to occasional sightings of fugitives from severe weather on the Continent. The magnificent, but nervous, bustards were built like small ostriches and were turkey sized (about 40 lb), 3 ft. long and nicknamed “the shepherds’ wild turkey”. The bustards were swift-running creatures with strong flight capabilities. They were giants among birds with a 6 ft. wingspan — and must have been a stunning sight in the Findon countryside until hunted to extinction. The mating display of the bustard was also a vision to behold. Apparently the male would put its head into its feathers and ruffle himself up for all the world like a fluffy cushion. Thus transforming a mostly brown bird into an entirely white one.
William Borrer was a noted ornithogist (resident of Henfield, Sussex) of the nineteenth century born was born in 1814. Fortunately for us he was informative on the subject of the bustards. He left us a legacy in the way of a description enabling us to imagine the birds grazing on the Sussex hillsides. He had been told about the big birds with long legs by his grandfather who was also named William Borrer (born 1753 and died in 1844). He had often hunted bustards with his greyhounds
He used to go out early in the morning, after a foggy night, to look for them feeding on the wet turnips, when they were frequently so thoroughly soaked as to be unable to fly. He said that his Grandfather "generally found them in little parties of five or ten and sometimes took five or six in a morning, commonly young birds, though occasionally he had known an old one to be caught, but they avoided them as much as possible, as when overtaken by the dogs, they fought savagely and had more than once damaged the greyhounds".
William Borrer added "They were most numerous on a part of the Downs between the Dyke and Thunders Barrow". From Cissbury Ring the Lancing Clump can be seen, along with Steep Down, and beyond is Thunders Barrow — not that far from Findon. As bustards were bred in Findon it is presumed they were a frequent sight on the village’s downland in the eighteenth century. How fascinating to think that the Great Bustard was seen on the South Downs. About 1830 there appears to have been a single example occasionally seen near Blatchington by a Mr. Catt who then occupied the farm there. It frequented the flat table-land which ran for a considerable distance in the direction of the Dyke. Prior to this flocks of these noble birds had been witnessed frequently on the Downs. They were bred in Britain until 1832 but on the decline from 1825 when they were resident on the downland and virtually disappeared by 1850, though one was reported on the hillsides above Brighton just prior to Christmas 1875. It was eventually shot on the hills in the Eastbourne environs near Ripe on 12th January 1876. People seemed to shoot anything that moved in those days. Since then there have been no further recorded sightings.
On 6th January 1891, a Great Bustard was shot at Pett Level (Rye, East Sussex) and that appears to be the last of the Great Bustard in Sussex. The great bustard’s size was its downfall, aided by human interference. Hunting and the loss of the vast open downland as at Findon, dramatically reduced its numbers. They were very wary, retiring birds and needed plenty of space around them. 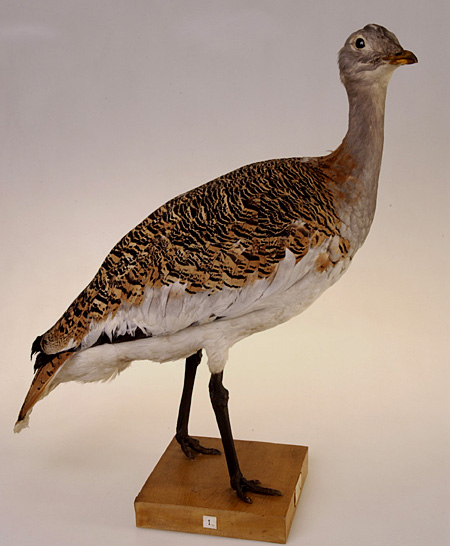 Victorian Great Bustard.
In April 2002 I heard the great news that bird conservationists reintroduced the bustard back into Britain. The Great Bustard Group sought a licence to import twenty-five birds each year for five years. The project was increasingly important because the Russian bustard population on the steppes of the Volga is coming under pressure from agricultural development. The project was a delicate one to undertake to transport bustard chicks to Britain and care for them through quarantine. Once reared the bustards were given a warm welcome and their freedom to roam Salisbury Plain just as the shepherds' wild turkeys once graced the Findon landscape. extensive research undertaken and Copyright of Valerie Martin 2002. It woud not be unreassonable to assume given that Borrer's work wouild have been known to ET Booth that he also hunted Bustards in the same area. They would have been in decline at that point but still available to acquire, hence the specimen located at the Booth Musuem.

We have to date encountered Great Bustards by Rowland Ward, Pratt of Brighton, TE Gunn and FE Gunn respectively and have seen others by unnamed taxidermists. We are keen to decpict upon this page Bustards by James Hutchings, Peter Spicer and Cullingford. If anyone has pictoral evidence of such then please contact us.