Rowland Ward Taxidermy.
Taxidemist to Big Game Hunters of a previous era. Regarded by many as the finest British historical taxidermist of his time.

For a detailed insight into this fascinating world of preserved natural history by Rowland Ward, you might wish to consider reading well researched book by Mr Robert Chinnery and Mr Christoher Frost, who have reserached Rowland Ward. Both books are well executed, with photographs and are now collector’s items in their own right. It was also decided given the current size of the Rowland Ward page and the fact that we have a significant number of other images and data that we would create another page dedicated to the life and work of Rowland Ward. 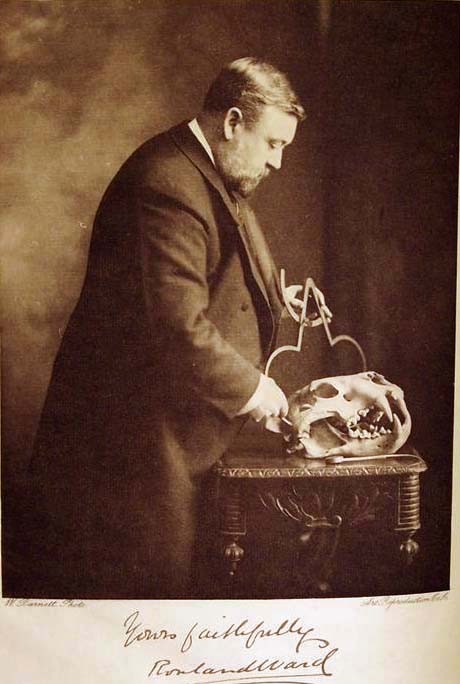 Rowland Ward, 1835-1912. This company was started by his Father, Henry Ward, who worked with the noted John James Audubon, an American Naturalist of his time. Rowland significantly expanded the business during the heyday of Big Game Hunting.

During the time he worked with his father, he began producing things on his own account. Early on in his career, he modeled two Horse heads which were seen by someone he described as 'A very wealthy man who had acquired riches during the American War'. As a result he was commissioned to mount a series of animal heads which were to adorn the walls of a large house his customer was at that time having built. The capital acquired from this project enabled him to leave his fathers employment, as his brother Edwin had already done, and go into business in his own right. He began, around 1872, at 27, Harley Street trading as 'J Rowland Ward'. He moved to 158, Piccadilly after a few years, at which time his business became known as 'Ward & Co. Ltd', although he retained his Harley Street premises until his death.
In 1879, the year his brother Edwin retired and a year after his fathers death, he transferred his studios from 158, Piccadilly to larger premises at number 166; 167 also came into his possession, perhaps at a slightly later date. In 1898, the business became, and remained, 'Rowland Ward Ltd.'. He says of his early days : "My ambition was to begin at that point in taxidermy where the old-school had left off. Instead of merely stuffing the skins of animals with quite a secondary regard to shape, I determined to study nature and adapt it, in connection with modelling, to the taxidermists' art." 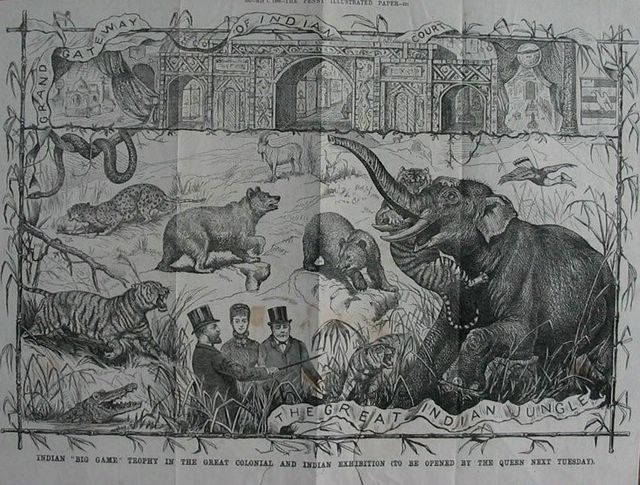 Newspaper cutting depicting Rowland Ward and the then King at Ward's exhibition of sub-continent animals. Rather nice image and thanks Mr Sailor for its unrestricted use. Would make a lovely print. Go to www.taxidermycollector.com and there you can download a large format printable version of this image for free. 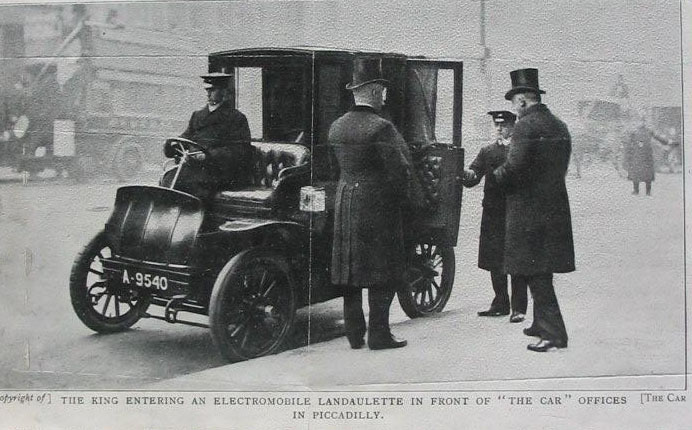 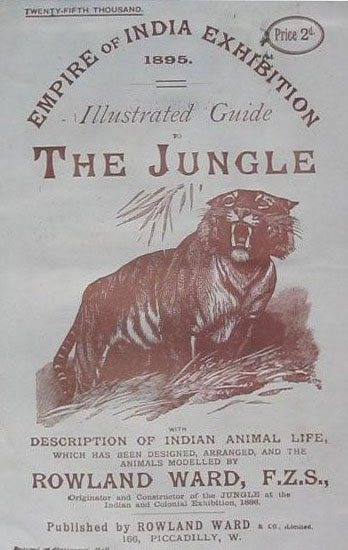 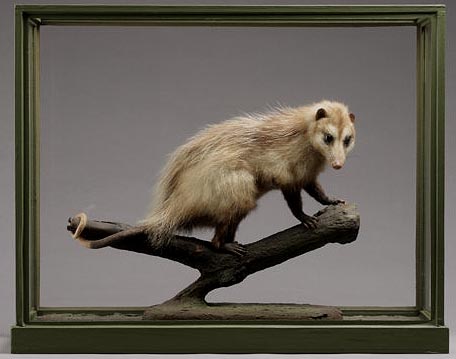 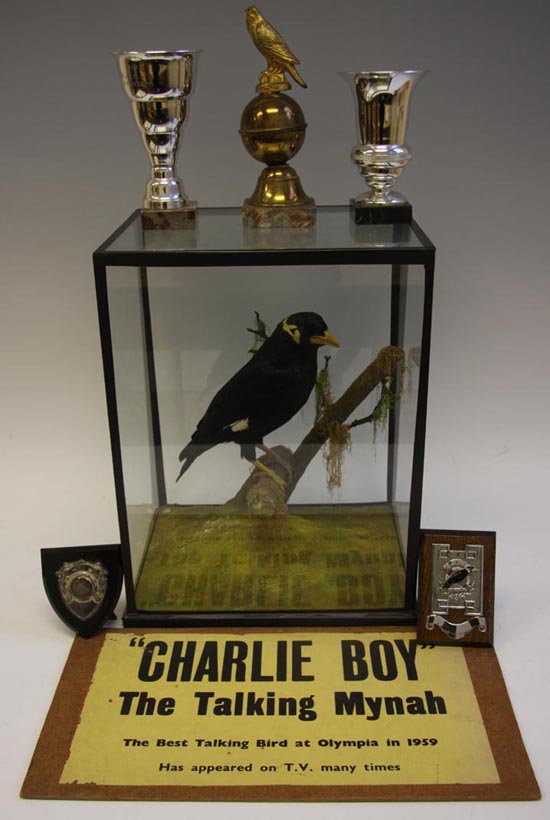 "Charlie Boy". Greater Hill Mynah mounted and preserved by Rowland Ward. An interesting piece of British Historical Taxidermy and certainly worthy of collecting, if the price is right that is. 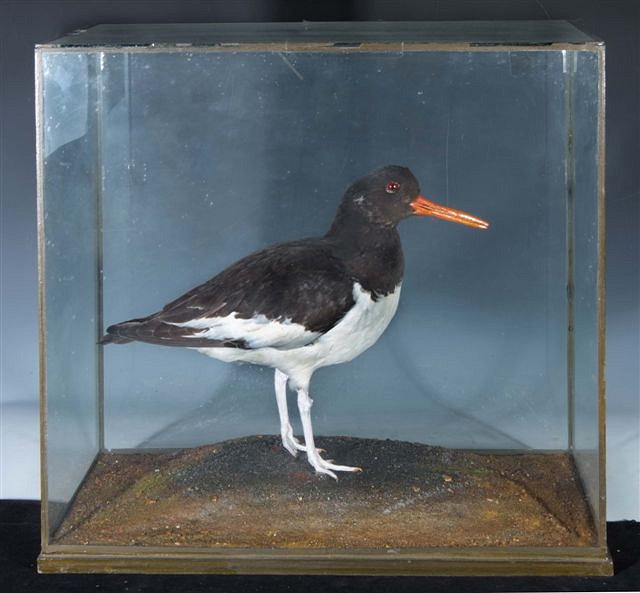 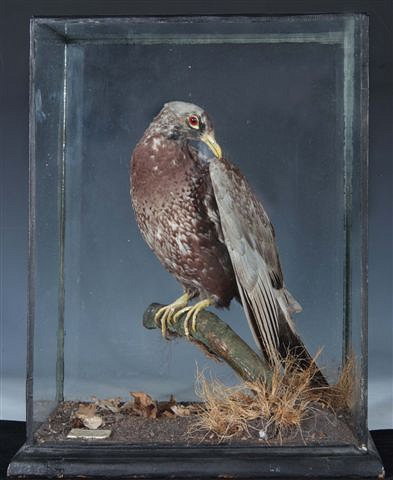 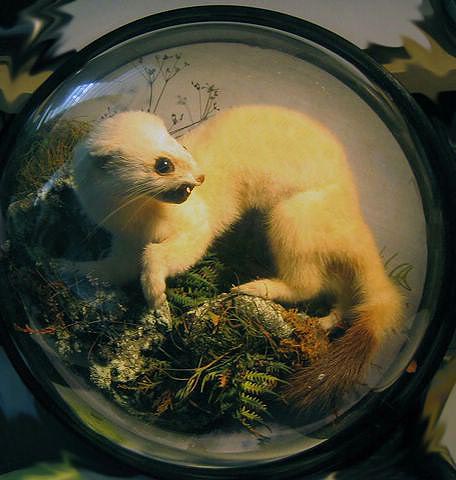 Stoat in ermine by Rowland Ward. 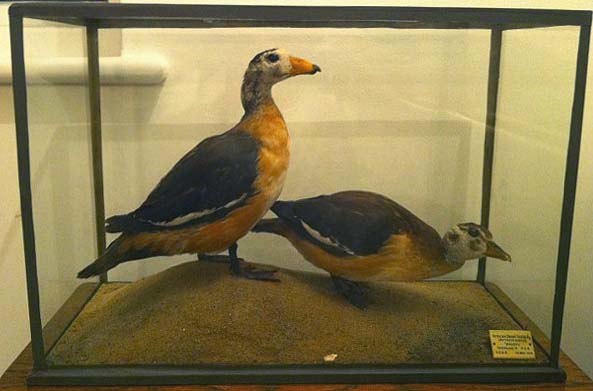 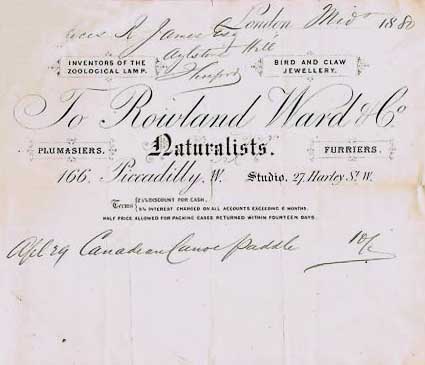 Interesting bill head from Rowland Wards for a canoe paddle 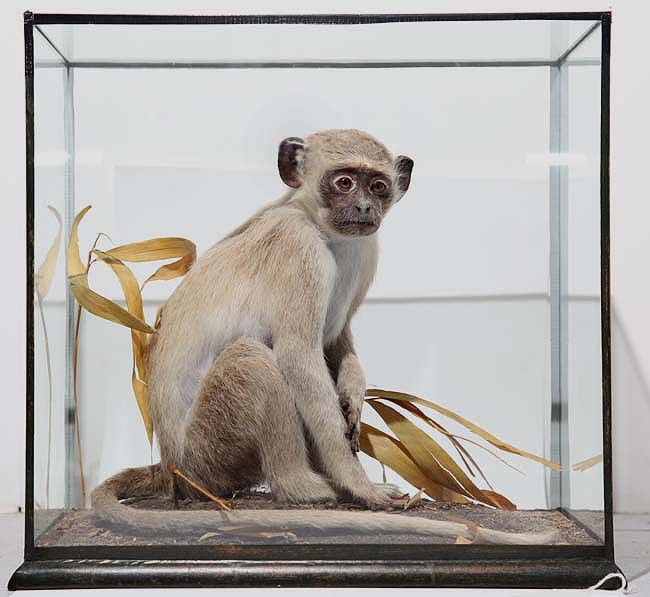 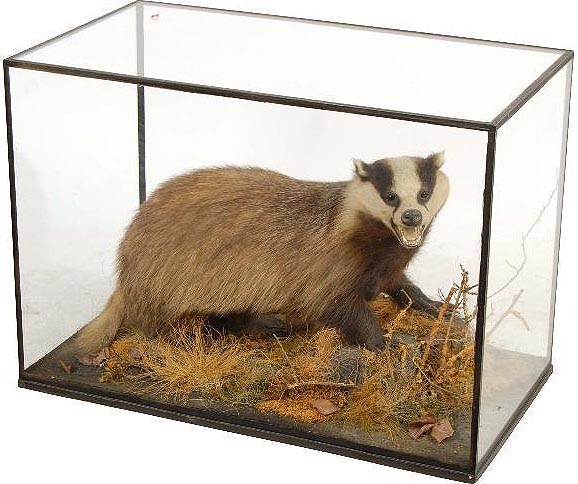 Badger by Rowland Ward.
Rowland Ward Ltd. Of Piccadilly became and remained for many years the largest and most famous taxidermy firm in the world. They specialized in, and were renowned for, their work on big game trophies, but their output covered all aspects of taxidermy. Rowland Ward was trained by his father Henry, himself a very well-known taxidermist in his day, to whom he dedicated his book on taxidermy, The Sportsman's Handbook. Henry Ward did take part in some of John Audubons expeditions across North American.
We know rather more about Rowland Ward (1848-1912), the youngest and most famous member of the family, than we do about the father or brother, partly through countless references to his business in magazines and newspapers, but more particularly through his autobiography A Naturalist's Life Study in the Art of Taxidermy. This was published in 1913, the year following his death, by his own publishing company for private circulation. It was printed in a very small edition, possibly as few as fifty copies. Not only is the book therefore rare, it is also a rare kind of book, and is indeed unique in being the only autobiography of a commercial British taxidermist of this era. 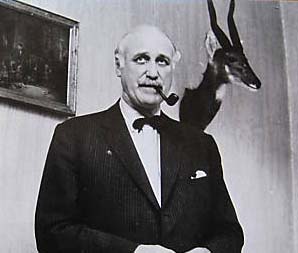 Stunning Peregrine in a dome by Rowland Ward. This birds was dusty, not unlike the Spicer Peregrines (remember them) and the groundwork needed some restoration. Another lovely case with a hand blown dome. More images to follow. Another quality case "fresh to the market". The dome is 57 inches tall 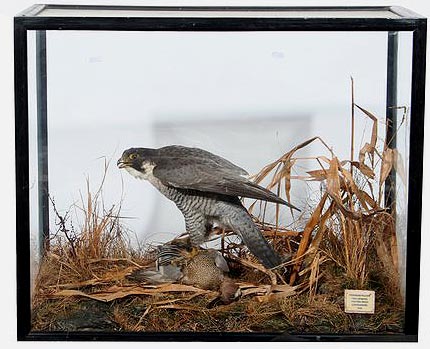 Very nice Peregrine Falcon and Garganey Teal (Summer Teal) prey at Gildings in Leicestershire on the 29th June 2010. OK who spat their dummy at the auction house then. 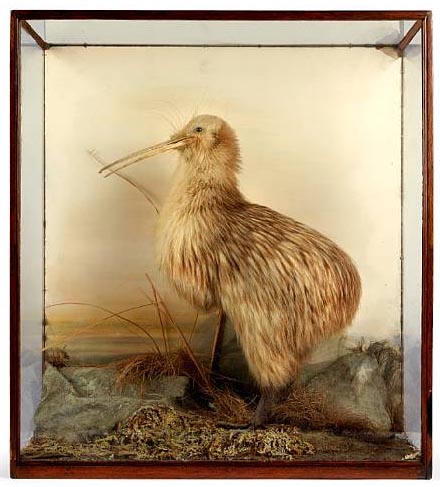 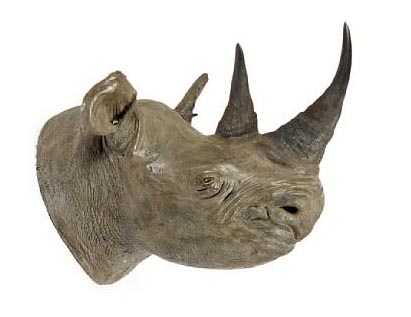 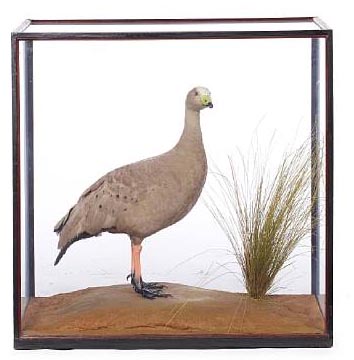 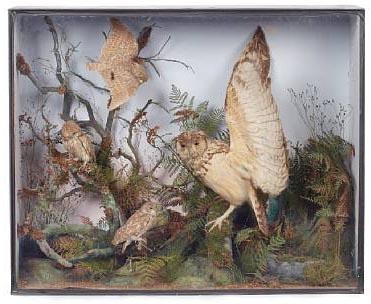 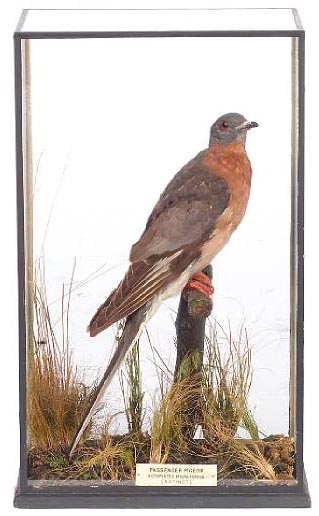 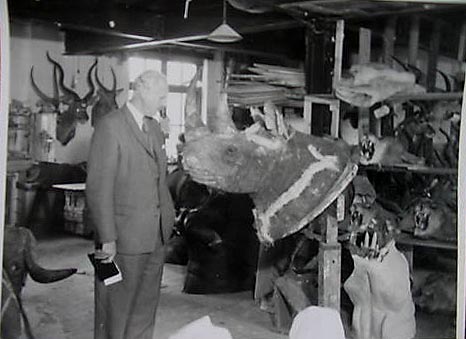 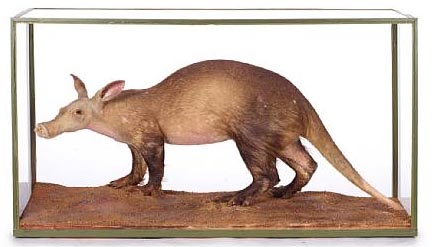 Aardvark by Rowland Ward. These items are museum quality and sourced historically in part for the seller by one of the UK authorities on the subject of victorian taxidermy. 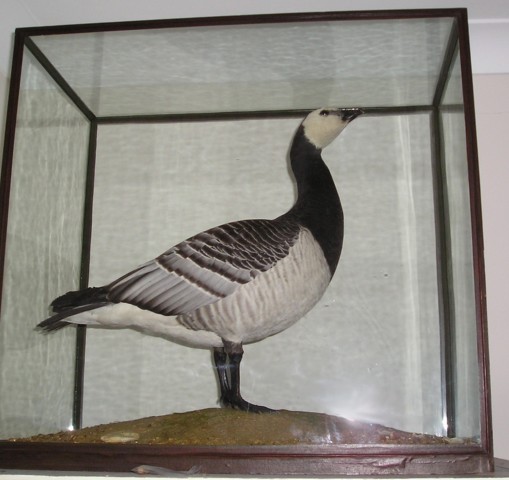 Barnacle Goose, shot on the Island of Jura in 1925, preserved by The Rowland Ward Company Ltd 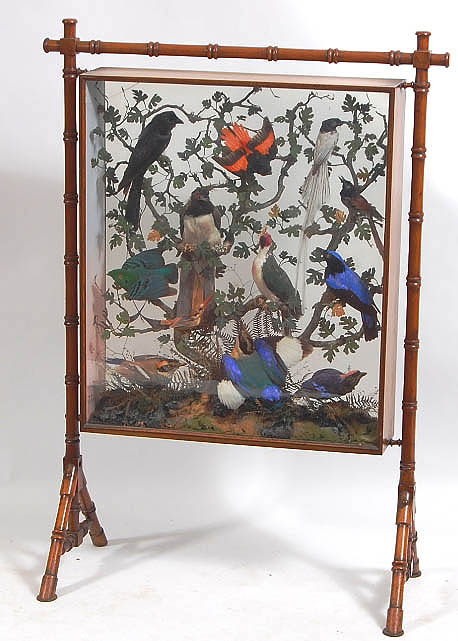 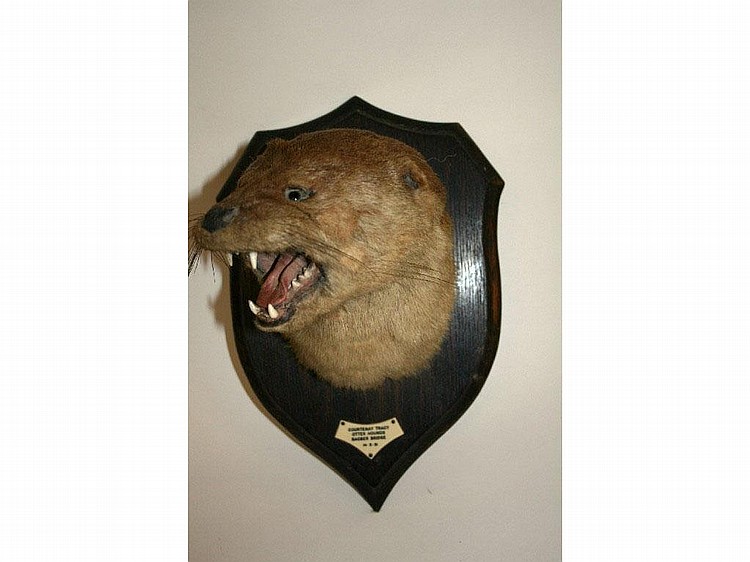 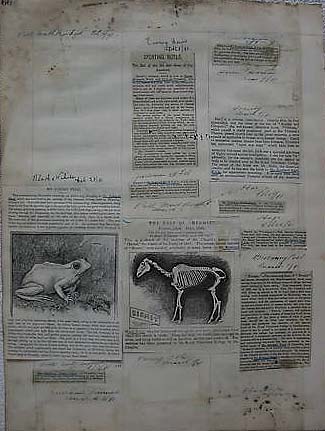 Original page from Rowland Ward's scrapbook. He tended to collect most things that were written about him. 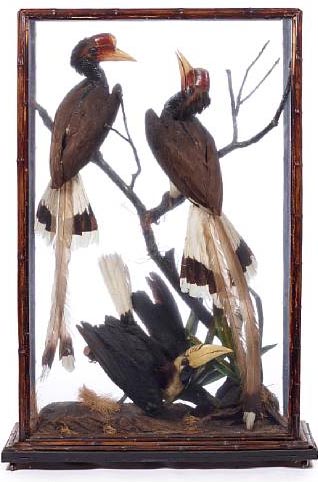 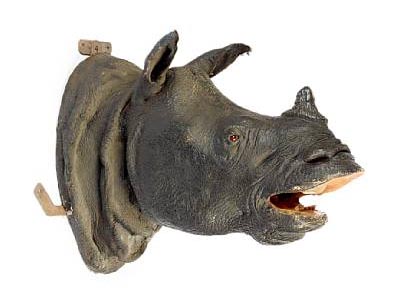 Javan Rhino by Rowland Ward
Source of the information is: www.southpacifictaxidermy